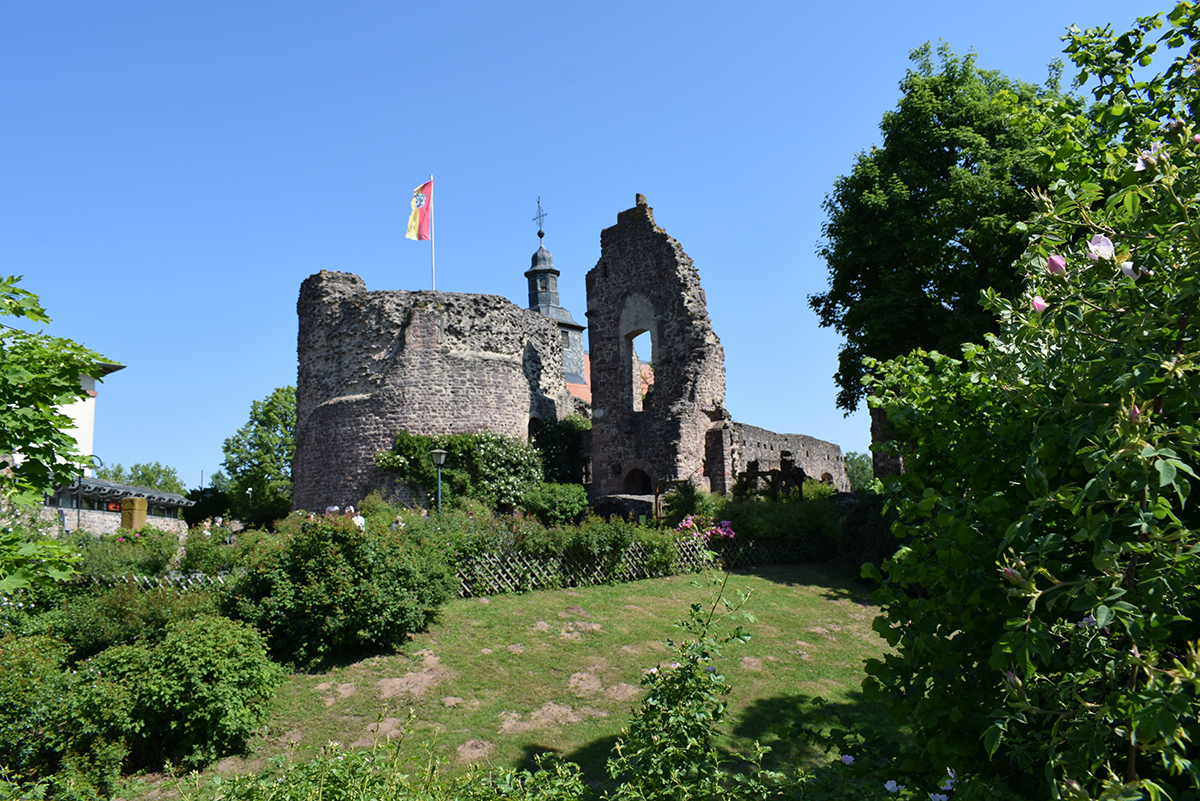 Burg Hayn, also called Hain or Dreieichenhain, is the high medieval ruin of a low castle (tower castle) in Dreieichenhain, a district of the Hessian town of Dreieich, in the Offenbach district

The castle was the seat of the imperial bailiffs, who administered the Wildbann (A wildbann were assigned special royal right to hunt in the Holy Roman Empire of the German Nation from around the 9th to the 15th centuries.) Dreieich from here on behalf of the emperor.

The Salier tower is the oldest visible building of the castle complex, built around 1080. It was the ancestral castle of the Lords of Hagen and for about 100 years the seat of the bailiffs of the imperial wildbann Dreieich.
From the pond side, parts of the cellar vault and the division of the individual floors can still be seen. With an original height of 25 m (five floors), a wall thickness of almost 3 m, and a floor area of ​​12.5 x 13.2 m, the residential tower is one of the largest of its time. Closely enclosed by a ring wall, he dominated an island measuring only 30 x 40 m in the middle of the marsh area of ​​the Hengstbach valley.
Around 1180 the tower castle was incorporated into the new castle complex with the expansion of the castle complex to the Hayn Castle in Dreieich and from then on served as a second keep and no longer as a residential tower.

In 1750 the tower castle collapsed down to the 22 meter high west wall that is still standing today. It now serves as the backdrop for the picturesque open-air stage.

The keep
The keep (round tower) was built around 1180 as part of the expansion of the castle complex under the lords of Hagen-Munzenberg.
With its original height of around 30 m and a diameter of 13 m, it is one of the largest mountain peace sites built in Germany. In 1792/93 it was removed to its current height of 14 m. The stones were used in the construction of streets and houses.
The keep served not only as a status symbol but above all to protect the castle and as a refuge for the residents of the city as well as a magazine, storage location, and dungeon.

The palas
1180, the Lords of Hagen-Munzenberg built the Palas as a representative residential building. The expansion to the east and south took place under the Lords of Falkenstein, 100 years later.
The palace shows correspondences with the Munzenberg castle in the Wetterau, the second eponymous castle complex of the Hagen-Munzenberger. Today, Romanesque and Gothic building elements can still be seen, which testify to the various renovation phases. The entrance is next to the keep on the west side of the building. To the left behind a door are the remains of a stone stair tower, through which one reached the upper floor. A narrow corridor leads to the right into the former kitchen with the brick base and an attached pantry. Behind it, a large meeting or dining room forms the center of the palace, where you can still see the fireplace and pillar bases. In 1792/93 the stone walls in front of the palace were demolished for further use of the stones. The first parts of the walls collapsed in 1802. There are spacious vaulted cellars below the palace.

In the place of today’s castle church, sacred predecessor buildings were documented until the 11th century.
The church in its current form was built between 1710 and 1718 after the last previous building burned down in 1669. Anyone entering the church can read an inscription in the gable above the entrance:
“You, O saint yourself and holy site protector don’t let it happen for no reason that she is destroyed by fire. But to you, who have already experienced the previous church’s destruction, extend your protective hand over the new one. “
Whether the inscription is an allusion to the destruction of the old church (the community baker Mr. Weißbender brought a warmer to the service on a Sunday after Christmas 1669 to warm his feet. A piece of glowing coal fell out and set the old building on fire). In any case, the simple baroque church has since been spared new fires and other destruction …

The valuable baroque organ from 1791 comes from the well-known Family Stumm who were organ builders. The pulpit of the Hainer carpenter, Aron Seitz has been preserved from the original build.